Following the Second World War, many older Mark Master Masons were finding that, on limited incomes, the upkeep of their, often very large, properties was becoming more and more of a burden.

RWBro The Reverend Canon Thomas Whitehead Taylor, Provincial Grand Master for the Mark Province of East Lancashire from 1948 to 1961, became increasingly concerned at their plight and sought ways to provide rented accommodation for Mark Master Masons, at a reasonable cost, through the creation of a local Mark Fund.

Canon Taylor held discussions with his close friend and Deputy, VWBro Thomas Sharples Barlow, a prominent citizen and councillor from Bolton and WBro George Farnworth Nuttall, a lawyer from Accrington who was an ardent worker for Freemasonry in general and the Mark Degree in particular.

As a result of these discussions, WBro Nuttall agreed to establish a charitable trust fund and VWBro Barlow committed to leave ‘Lyndene’, his private residence on Harpers’ Lane in Bolton, to the trust fund in his Will.

Canon Taylor sadly passed away in 1961 before his vision could be realised. RWBro Barlow, who succeeded Canon Taylor as Provincial Grand Master, was determined that the project should come to fruition and towards the end of 1962, he announced that eight self-contained flats were to be built on land behind ‘Lyndene’ at Harper’s Lane.

Brethren from across the Province readily gave their services, both financial and practical, and by early 1964 the first eight flats were completed. As a perpetual memorial to Canon Thomas Whitehead Taylor, they were named the ‘Canon’s Close Flats’.

Such was the demand, support and interest in the Canon’s Close development, that in late 1964, RWBro Barlow transferred an additional plot of land, which had been the site of the tennis court at Lyndene before his wife’s death, to the fund.

Eight bungalows were built on this land with the support of a generous grant from the Mark Fund of Benevolence. The Grand Master, MWBro Lord Harris, kindly allowed his name to be associated with what became known as the ‘Harris Bungalows’.

The East Lancashire Mark Benevolent Fund Ltd. was incorporated as a Company Limited by Guarantee on 11th January 1966 and was granted Charitable status by the Charity Commissioners in March of that year. The newly formed Charity took over the assets and responsibilities of the Canon’s Close Flats Account, which included the Harris Bungalows.

Thomas Sharples Barlow died on 24th June 1970 and the remainder of his estate came into the possession of the ELMBF.

In 1984, the neighbouring property of ‘Fairhaven’ (home of Thomas Sharples Barlow’s wife Elizabeth before their marriage) came onto the market and was purchased by the ELMBF. A block of eight flats was built on the land and, appropriately enough, named ‘Barlow House’. The Province was greatly honoured when, on the 4th December 1987, His Royal Highness Prince Michael of Kent, Grand Master of the Grand Lodge of Mark Master Masons officiated at the opening of Barlow House.

The Prior’s Close residential complex as we know it today occupies the site of a property known as ‘Whinfield’, on Preston New Road in Blackburn.

Whinfield was built in 1878 by the Hornby family which included many members of Blackburn’s political and sporting elite.

William Henry Hornby Senior (1805-1884) was a successful industrialist, employing many hundreds of people in his cotton mills in Blackburn. He was appointed Chairman of the Conservative Party at the age of 27 and was the first Mayor of Blackburn in 1851 following the town’s incorporation as a Borough. He was MP for Blackburn from 1857 to 1865 and retired from public life to his country seat, Poole Hall in Cheshire, in 1867.

Hornby’s fourth son, Sir William ‘Harry’ Henry Hornby, 1st Baronet, DL (1841-1928), was also an industrialist and Conservative party politician. He was Mayor of Blackburn on two occasions, the first in 1876, being the 25th anniversary of his father’s first term of office as Mayor and again in 1901, the Jubilee year of his father’s first elevation to that office. Two years later he was made a Freeman of the Borough. Harry sat in the House of Commons from 1886 to 1910 as MP for Blackburn but is notable for never speaking, or even attempting to speak, in Parliament throughout his 24-year career there. He was created 1st Baronet Hornby of Brookhouse in 1899.

Hornby’s younger brother, Albert Neilson Hornby (1847-1925), known as A. N. Hornby (and nicknamed ‘Monkey’ Hornby on account of his small stature and excess of energy), was one of the best known sportsmen in England during the 19th century excelling in both rugby and cricket. He was the first of only two men to captain his country at both rugby and cricket but is also remembered as the England cricket captain whose side lost the Test match at home against the Australians in 1882 which gave rise to the Ashes. Additionally, he played football for Blackburn Rovers.

The last private owner of Whinfield, prior to the property coming into the hands of the ELMBF, was Blackburn solicitor Henry Whittaker, OBE, FSA (1884-1961).

Whittaker attended Queen Elizabeth’s Grammar School and later served on the school’s Governing Body from 1932 (as Chairman of Governors from 1950) until his death. The Henry Whittaker Prize is still awarded annually by the school in his memory. He also served for many years as Chairman of the Blackburn Savings Committee (for which he was awarded the OBE in the King’s Birthday Honours List of 1951) and was Vicar’s Warden at St. Mary’s Church in Mellor for over 30 years.

Henry Whittaker was a Mark Mason and a close friend of Thomas Sharples Barlow. He was one of the witnesses at Barlow’s wedding to Elizabeth Edge at St. Peter’s Church, Halliwell on 23rd July 1918.

Henry Whittaker died on 13th April 1961 and, in 1966, his widow left the property at Whinfield to the newly established East Lancashire Mark Benevolent Fund Ltd. The house was demolished and three two-storey blocks of flats, similar to those at Canon’s Close, were built alongside two existing cottages in the grounds.

Thus was born the Prior’s Close complex, so named in reference to the Provincial Priory of Lancashire in the Order of the Temple (better known as ‘Knights Templar’), of which Barlow, in addition to being Provincial Grand Master for the Mark Province of East Lancashire, also held the Office of Provincial Sub-Prior from 1943 to 1969.

The first block of eight flats was built by one company and the second and third blocks, each comprising four flats, were built at a later date by a second company. During the demolition of ‘Whinfield’, three stained-glass windows were recovered and incorporated into the communal hall and stairway of the first block of flats.

The extensions to the ground floor flats at the ends of each block were constructed with flat roofs so that the first floor flats could be extended with an additional room once the ELMBF had accumulated sufficient funds. However, several years later when the project was revisited, it was found that the building regulations regarding the depth of footings had changed and it would have been necessary for the extensions to be completely demolished and rebuilt. This would have proved too costly for the fund and inconvenient for the existing tenants and the project was cancelled.

The two cottages have, rather confusingly, retained their original addresses of No.6 and No.7 Whinfield Place and have a different post code to the flats. Originally part of the stables, the building was converted into cottages to accommodate the staff employed at Whinfield. They were left to the ELMBF along with the rest of the estate in 1966 and over the years have been renovated to create two attractive dwellings.

Through the generosity of the ELMBF, local Mark Lodges and individual Mark Master Masons, a number of developments have been made possible to improve the amenities at Prior’s Close:

In 1995, the widow of WBro Desmond Bennett, Chairman of the Prior’s Close Committee from 1988-1995, presented a bench to Prior’s Close in memory of her late husband.

In 2001, four Mark Lodges donated the proceeds from their joint Ladies’ Evening to Prior’s Close. The Committee decided to construct a patio area, complete with a table, chairs and umbrella, where the residents could sit and chat.

In 2004, an ornamental fountain was erected in the centre of the lawn in memory of Mrs Esther Briggs, a former resident of Prior’s Close. 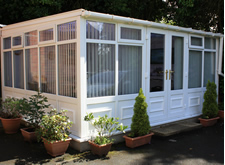 Also in 2004, the ELMBF financed the construction of a sun lounge in one corner of the grounds. The residents raised additional funds through raffles and social events to furnish and carpet the sun lounge which has been used for many purposes over the years, including coffee mornings, sherry and mince pie parties at Christmas and special birthday celebrations.

A major development programme was commenced in 2017 to replace the roofs on the flats. The first phase involved replacing the roof on Block ‘A’ housing flats 1-8 and the flat roofs on the extensions of the ground floor flats were replaced with pitched roofs.

The compiler is pleased to acknowledge various sources including the paper on the East Lancashire Mark Benevolent Fund Ltd. by VWBro John Crawford (Treasurer of the ELMBF from 2002-2016) and an article on Prior’s Close by WBro Michael Thompson (Secretary of the Prior’s Close Committee from 1999-2014).